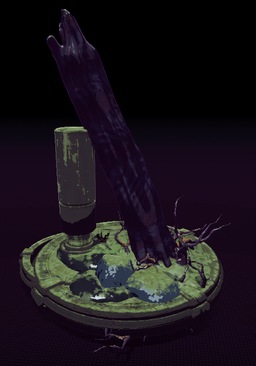 The Wetland Aspect is a moist mire found on Petrichor V and is part of the second set of Environments encountered in Risk of Rain 2. It consists mostly of ruined stone structures and swampy areas filled with water.

The Altar to N'Kuhana is a secret area in the Wetland Aspect Environment.

The challenge Her Concepts is completed in this environment. Under the cliff on the map, there is a gap where the player can enter which leads through a tunnel to the Altar to N'kuhana. The Altar to N'Kuhana consists of a large hole with a yellow skeleton dangling above it. Destroying the skeleton will complete the challenge unlocking

Jumping into the pit below the skeleton will teleport the player back to the normal map area.

The Newt Altars can spawn in several locations of the Wetland Aspect.