Siren's Call is an area added in the Skills 2.0 update, being located on Petrichor V. The stage is a part of the fourth set of Environments in Risk of Rain 2.

It features what appears to be long-abandoned ancient technologies stuck in a Titanic Plains-esque landscape.

This is the only area where the Alloy Worship Unit, a stronger variant of the Solus Control Unit, can be found in. 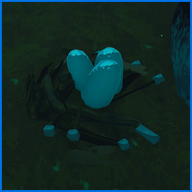 Several Alloy Vulture Nests will spawn at random locations around Siren's Call. Destroying the eggs of a nest will drop healing orbs that heals for 40% of the player's max health.

Destroying 6 nests will spawn the Alloy Worship Unit, a boss unique to Siren's Call. Upon defeat, it will drop a legendary item for each player in the game (dead or alive) around the central pillar. The item dropped will be the same for all players.

The warning message "You hear a distant whirring" will appear in the chat upon destroying the 5th nest. Destroying a 6th nest will trigger the message "The whirring grows loud" and the spawn of the boss.

Players might want to be careful with their attacks, as a lot of items granting large areas of effect can easily destroy nests against their will. Examples of those items are

Killing enemies sets nearby enemies on fire.
Killing an enemy ignites all enemies within 12m (+4m per stack). Enemies burn for 150% (+75% per stack) base damage.,

The Newt Altars can spawn at several locations on Siren's Call:

The internal development name for Siren's Call is Ship Graveyard.[1]

Two broken probes can be seen blinking their eyes. The blinking reads, in Morse, "updog".