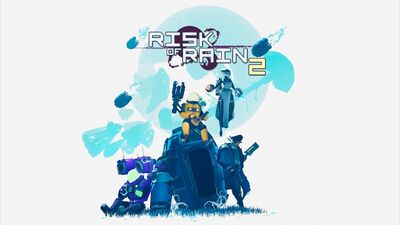 Please feel free to contribute by creating new articles or expanding on existing ones.

Risk of Rain 2 follows the crew of UES : Safe Travels as they try to find UES : Contact Light and any survivors along their path. They have to try and survive the hostile wildlife and environment as difficulty increases over time, navigating Petrichor V via the teleporters strewn across the entire planet. The crew loop endlessly through many distinct environments, but end upon the moon to defeat the final boss.

Risk of Rain 2 is the sequel to the classic multiplayer roguelike Risk of Rain. It is developed by Hopoo Games (the Soundtrack by Chris Christodoulou), and published by Gearbox Publishing. The game released on August 11, 2020, after Early Access began on March 28, 2019.

Survivors of the Void

How to help
See how you can help contribute to Risk of Rain 2 Wiki! Remember to maintain a standard for grammar and punctuation in your contributions, please.

Register
Register an account to keep track of your contributions.