Rallypoint Delta is a desolate tundra located on Petrichor V and is found in the third set of Environments in Risk of Rain 2. It is believed to be an adaptation and continuation of Ancient Valley from Risk of Rain. 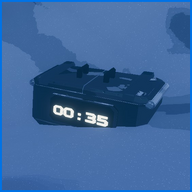 A soon to be expired Timed Security Chest

The Timed Security Chest is a Chest with a timer on it. In order to open it, the player needs to reach it within 10 minutes (counting from the start of the run, not from the moment you enter the area).

If there is a - sign in front of the timer, the Timed Security Chest is expired, and shows you how much time has passed since it locked down. Otherwise, it shows how much time you have left before the chest expires.

The Timed Security Chest will always hold a

140sFire a ball of energy that electrocutes nearby enemies before detonating.
Fires preon tendrils, zapping enemies within 35m for up to 600% damage/second. On contact, detonate in an enormous 20m explosion for 4000% damage.. Upon opening it for the first time the [REDACTED] challenge is completed, unlocking the Preon Accumulator.

There are three possible spawns for the chest:

The location of the chest can be quickly identified with the small red-light standing lamps that will spawn near it. Whenever a chest is not at a spot, the couple nearby lights will be turned off or missing.

The Newt Altars can spawn at several locations on Rallypoint Delta.