Gilded Coast is a Hidden Realm Environment that can be reached when the player enters a Gold Portal after activating an Altar of Gold or by using a Lunar Seer at the Bazaar Between Time, although this is uncommon.

This area is where the player will fight the boss

Aurelionite, the Titanic Goldweaver. The main purpose of fighting him is to obtain his boss item, the

This is also the location for the Blackout challenge.

The Gold Portal can only spawn by spending money on an Altar of Gold and then completing the Teleporter Event. 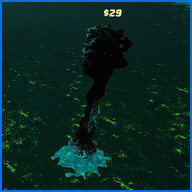 Scattered across the map are seven Halcyon Beacons, each costing gold to activate. When the fourth Beacon is activated,

Aurelionite will spawn. Halcyon Beacons have a base cost of $25, equal to the cost of a normal chest. This cost scales over time with each stage like all other interactable items.

While there are inactive Beacons,

Aurelionite is invulnerable to all damage. After a certain time passes,

Aurelionite will deactivate all Beacons, requiring the player to go through and buy them all again. Because of this, a strategy is to grind through mobs before

Aurelionite spawns to save up a lot of gold.

There are four normal chests that are guaranteed to spawn in set locations around the map. The costs of these chests scale the same as other levels, however the costs for these chests are not recalculated until the player finishes the next normal stage, meaning the cost multiplier carries over after you leave Gilded Coast and complete the next area.

One chest will spawn at each extremity of the half-buried ring structure and two chests will spawn in the water nearby, one behind a tree, the other behind a fallen golem statue.

The Environment Log can be found far above the map on one of the chain-linked ring structures that stretches out from the ground. The Log is located at the base of the seventh ring, tucked away near the center where the sixth ring loops over it.

Unlike most other environment logs, it will not disappear 5 minutes after entering the stage.

A significant amount of mobility is required to reach it; this can be easily accomplished with