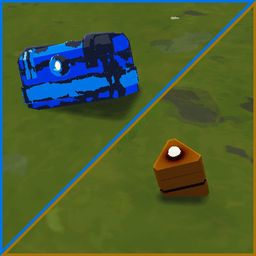 Chests are Interactibles that are scattered throughout every Environment (excluding the Bazaar Between Time, A Moment, Fractured, A Moment, Whole, and the Void Fields) at random. Chests contain Items that must be purchased with Gold.

The basic Chest variant. A Small Chest has a chance to contain either a Common, Uncommon or Legendary item.

A Large Chest costs twice as much as a Small Chest and is rarer, but it contains an item of at least Uncommon rarity, and has an increased chance to hold a Legendary item.

A Legendary Chest is an expensive chest that costs 16 times as much as a Small Chest. However, it is guaranteed to hold a Legendary item. It can only be found starting from the 4th stage onward, and natural generation is extremely rare.

There is one guaranteed spawn location in Abyssal Depths, nearby a small, yellow, glowing column, in a small cave full of foliage partially covered by a rock, ground-level, near the center of the map. It is also guaranteed to spawn in Sundered Grove, in one out of five different spots around the map.

An Equipment Barrel costs as much as a Small Chest and always contains an Equipment.

A Multishop Terminal features a choice out of three Items for you to buy, costing the same as either a Small Chest or a Large Chest, depending on the rarity. After buying one item the other items are locked and cannot be obtained from this Terminal anymore. A Question Mark indicates that the item in the corresponding slot will be a random item of that rarity.

An Equipment Triple Shop costs twice as much as a Small Chest. It is similar to a Multishop Terminal, but sells Equipment instead.

A Category Chest costs 20% more than a Small Chest and can come in three varieties: Damage, Healing, and Utility. Damage Category Chests contain Damage-based items, and so forth.

An Adaptive Chest costs twice as much as a Small Chest and can only spawn from stage 3 onwards. Upon activation, the center portion raises up to reveal a small compartment, in which it begins to cycle through a variety of items at an accelerating rate. Any item can appear in this cycle, including Legendary items and Equipments at around the same frequency as a small chest. Activating it again will drop the item currently shown in the cycle. Allowing it to cycle for a long enough period of time will force it to spit out a random item instead of allowing you to choose.

Gain access to a Rusty Lockbox that contains a powerful item.
A hidden cache containing an item (80%/20%) will appear in a random location on each stage. Opening the cache consumes this item.. It does not cost Gold to open.

A Cloaked Chest is an invisible chest that can be found in all Environments. In contrast to other chests, this one does not have to be purchased. However, it is very difficult to see, being completely transparent, only slightly distorting the background.