Artificer is a playable character in Risk of Rain 2.

The Artificer is unlocked upon completing the Challenge "Pause". (Free the survivor suspended in time.) 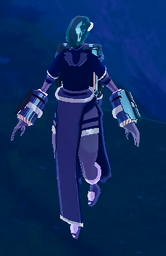 Retrieved from "https://riskofrain2.fandom.com/wiki/Artificer?oldid=10584"
Community content is available under CC-BY-SA unless otherwise noted.