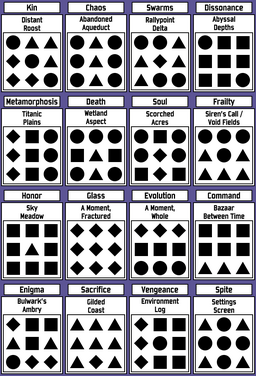 Artifacts are Game Modifiers that are found in the world in-game.

To unlock Artifacts you need to use the correct Artifact Code in Sky Meadow, using the Compound Generator below the map, then interacting with the laptop. A Portal to the trial for that Artifact in Bulwark's Ambry will spawn.

The Compound Generator will cycle in the order: square, circle, triangle, diamond (■ ● ▲ ♦)

In Bulwark's Ambry, the Artifact whose trial is being attempted will be active and an

The reductions scale down the lower the base chance is, here is a table showing a few examples of the difference in base chance for a normal monster:

Artifact design in the credits
Retrieved from "https://riskofrain2.fandom.com/wiki/Artifacts?oldid=15109"
Category: