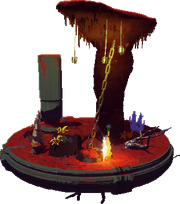 The Abyssal Depths is located within the crust of Petrichor V, and is a part of the fourth set of Environments in Risk of Rain 2.

A hellfire forged zone that is believed to be a continuation and adaptation of the Magma Barracks from Risk of Rain.

A Legendary Chest will always spawn in the center of the environment, nestled between the rock faces in a nook behind some plants.

A broken robot can be found on the high up platforms of the stage. Repairing it with a

Looks like it could power something. EXTREMELY unstable... will complete the Power Plant challenge and unlock REX as a playable survivor.

The Newt Altars can spawn at several locations within the Abyssal Depth: