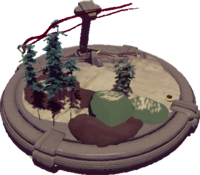 The Abandoned Aqueduct is an arid, sprawling desert located on Petrichor V and is a Stage 2 Environment encountered in Risk of Rain 2.

Massive skeletons and pools of tar are littered around, and a towering aqueduct pouring down tar dominates the area.

The Hidden Chamber necessary for the completion of the Death Do Us Part Challenge is locked behind the Ancient Gate located in the sandy hills outside of the central aqueduct walls, just behind the large tar pit. To open the gate, two Pressure Plates must be found and triggered. These Pressure Plates spawn in two of eight different locations throughout the level, and can be located using the

Both plates must be activated and held down at the same time, whether by multiple players or weighted objects such as:

When both plates are activated, the Ancient Gate will open and the tunnel to the Hidden Chamber may be entered. Inside are two unique Elite

Elder Lemurians; Kjaro and Runald. Upon their death, they will drop a

High damage hits also blasts enemies with runic ice. Recharges over time.
Hits that deal more than 400% damage also blasts enemies with a runic ice blast, slowing them by 80% for 3s (+3s per stack) and dealing 250% (+250% per stack) TOTAL damage. Recharges every 10 seconds. respectively, and will complete the challenge Death Do Us Part which allows both items to drop in future runs.

The Newt Altars can spawn in various locations across the Abandoned Aqueduct: